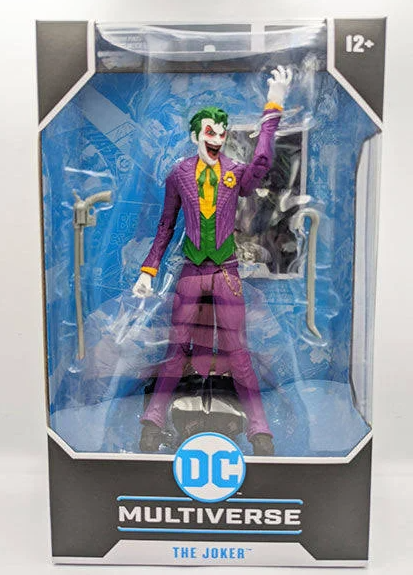 Once a small-time crook, The Joker fell into a vat of chemicals that turned his skin white, his hair green, and his lips red—like a crazed clown. His crimes always involve pranks and jokes ending with twisted punchlines that are only funny to The Joker. He may look like he’s clowning around, but this guy is bad news for Batman and Gotham City!

The DC Multiverse Wave 3 Modern Comic Joker 7-Inch Action Figure is based on the DC Rebirth comic book, and includes long nose blaster and crowbar. It comes packaged in a window box and includes a trading card and display stand.

The Joker figure based on the DC Rebirth comic books

The Joker accessories include long nose blaster, crowbar, and base

Included collectable art card with The Joker artwork on the front, and character biography on the back

Make any item on our site a gift by adding a gift basket base or a gift box to your order. We will combine all purchases into one awesome gift for that geek in your life.