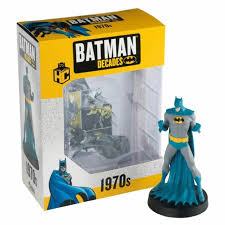 Athletic and strong, the Batman of the 1970s was ready for anything the world could throw at him!

The Batman of 1970s will always be associated with the art of the talented Neal Adams, who brought back the moody ambience to Batman and his world. Shrouded in the enveloping folds of an enormous cape, the Dark Knight operated in a shadowy world of street crime and international intrigue.

This Batman Bronze Age 1970s Figurine was inspired by the artwork from Detective Comics #327 and later. The Dark Knight is ready for any challenge on his way, clenching his fists and looking fiercely in the face of danger! He is shrouded in the classic colours of Batman, grey and blue, with an extra-long cape and Batman insignia in a yellow oval.

This Batman Silver Age 1970s Figurine comes with a 12-page magazine looking at the original concepts and new gadgets of the character, and at how the Dark Knight moved beyond the boundaries of Gotham City.

The Dark Knight, more powerful than ever, is a perfect addition to your Batman collection!