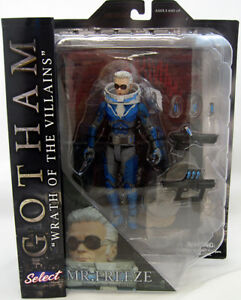 A Diamond Select Toys release! just when you thought it was safe to go back to Gotham! the critically acclaimed action figure line based on the hit fox TV series serves up the wrath of the villains, with three new 7" scale figures of Gotham's most dangerous men! Azrael, Mr. Freeze and Professor Hugo strange each feature up to 16 points of articulation as well as character-appropriate accessories, and each comes with an awesome diorama piece inspired by the show! Hugo strange comes with the conditioning chair from Ark ham Asylum, and freeze and Azrael each come with part of the jail Cell from the Gotham city police department! collect them both to build the diorama and put them in a Cell where they belong! packaged in the display-ready select packaging with side panel artwork for shelf reference. Sculpted by gentle giant! figures sold separately.